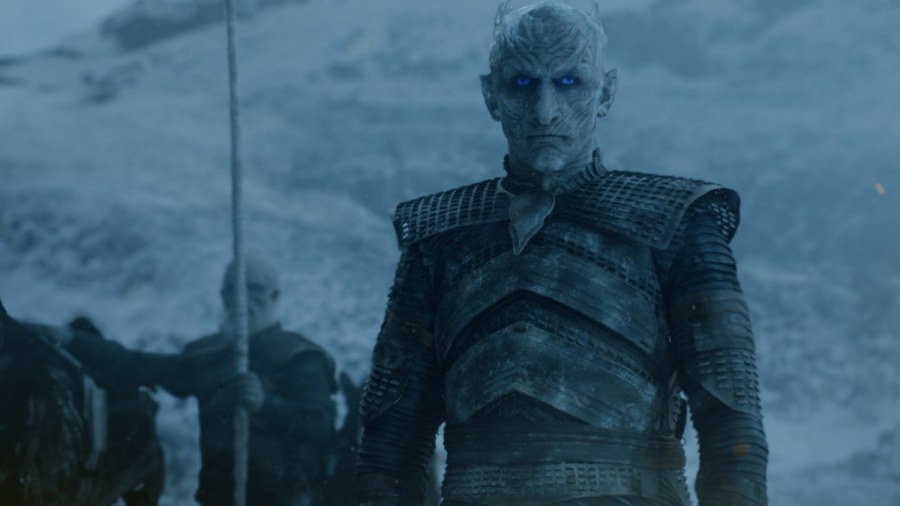 The Night King. The Long Night. The White Walkers.  The wights. R’hollor. The Lord of Light. Magic. Inquiring minds want to know more…

During the “long night” that was the nearly two year break between seasons 7 and 8 of Game of Thrones, a friend and I were comparing notes about our favourite — and least favourite — storylines and moments… as well as outstanding questions we had that we hoped would be answered in the final season.

As someone who enjoys the fantasy elements of GoT as much as the political machinations and callbacks to actual historical event, many of my burning questions involved the Night King, the White Walkers, and the army of the dead. I also have a lot of questions about R’hllor (the Lord of Light and the religion built around him).

While I expect few (if any) of these questions to be answered in the much-anticipated battle of Winterfell (and, well, life) in season 8 episode 3 — or even before the series ends — hopefully George RR Martin might just answer them before the book series concludes.

Why do the Walkers keep recreating that symbol from around that weirwood tree where the Night King was made? The writer of season 8 episode 1 claimed they were using the Children of the Forest’s spiral pattern as a kind of perversion and blasphemy (like the upside down cross). Not the most compelling answer, if true, but there we are…

Where have the Night King and White Walkers been for…1,000 years? Is it tied in with a resurgence of magic?

What happens during the normal winters, up in the Night King’s neck of the woods aka the Lands of Always Winter? What makes this winter different?

In season 1, Sam says the White Walkers have been sleeping under the ice for thousands of years. In season 2, he says it’s been 1,000 years since the Night’s Watch last sounded three horn blasts for White Walkers. And at the end of season 4, there are wights under the ice that spring up to attack Bran, Jojen, Meera, and Hodor. What wakes them up? And is it that people dead or buried anywhere can be awoken? Say, like in the Crypts of Winterfell…?

There are hints that when Daenerys’ dragons were born, there was a kind of resurgence of magic (as per the warlocks in the House of the Undying in season 2). But whether this led to Dany being able to birth the dragons or the other way around, and how a magic “deficit” impacts the Night King, remains to be seen. It will also be interesting to see if driving back magic — including the dragons — may be key to defeating the Night King and the army of the dead.

The Craster connection. And…why only boys?

How did Craster know that sacrificing his sons would placate the Walkers? Is this some sort of practice that’s been handed down… or that is, somehow, communicated to him (and by whom)? Do the wildlings do it too? Were boys only offered up by Craster because he’d then have more women to breed?

To fight or not to fight…

The Walkers and the full army of the dead pass right by Sam at the end of season 2, and leave him unharmed. By contrast, a different wight immediately attacks Sam after we see his brother of the Night’s Watch has been nicely staged holding his head… So, what is the logic of the Walkers (and wights), and whether they kill or not? How much autonomy do the Walkers have? What determines who and when they need to fight — and kill — and why?

Is the Night King a greenseer?

Is he a greenseer, like Bran and the Three-eyed Raven? Does he use the weirwood trees to see as well? Sam’s close to a weirwood in season 3 before he kills the Walker, and the crows seemed to be feeding back information as well… Given how much more time the Night King would have had to refine his abilities, it almost makes the battle of Winterfell seem unwinnable, with the Night King knowing and being able to anticipate everyone’s every move. That certainly seemed the case in season 5 for “Hardhome”, and in season 7 for “Beyond the Wall”.

The Night King’s mark on Bran…

When he puts that mark on Bran in season 6, how does that work? He must be a greenseer to be able to catch sight of Bran in the vision… But how does he physically touch him? Can Bran do this with someone else, or is the a Night King-specific, ice magic thing? The Three-Eyed Raven told Bran people couldn’t hear him when he was time-travelling (“whispers on the wind”), but is that really true?

“The past is already written, the ink is dry”

Related to that (in season 6, episode 3), the old Three-Eyed Raven says this… though, based on what happens with Hodor, it seems like it’s a bit dodgy. And it calls into question whether Bran can in fact alter the past. Enough theories have circulated around what would happen to Bran if he did go interfering, or got stuck in one of his visions…

Martin keeps talking about the unpredictability of magic, and the unreliability of history. Some magic works out, but some doesn’t. There’s that old edict that history is written by the victors, and this scene here where Bran literally witnesses that the victors here — Ned and Howland — lied through their teeth about what the “history” was, and which became the undisputed record of the events demonstrates how inaccurate a picture we can have of things if we trust only what we’re told.

I don’t know that the Three-eyed Raven is not an unreliable narrator either, manipulating Bran (since Bran is unfailingly wilful, defiant, and impatient) into backing off because he knows the danger. He literally steps in front of Bran and takes him out of the vision near the Tower of Dorne. And when he looks at Bran as he runs and calls after his father Ned, the Raven looks anxious, distressed. How much does he already know, about when he’ll die, how it’ll happen, and how much will be from Bran’s pig-headedness? Why doesn’t he do more to stop if, if he does?

Seeing into the future seems to be something that’s dodgy at best — even the past. In season 7, Bran also gets it only partially right as he discovers Jon’s ancestry. It’s not until Sam tells him Rhaegar and Lyanna were secretly married that he realises Jon’s name is not Jon Sand but Aegon Targaryen.

Can Bran warg into Viserion?

Seems unlikely, and that even if he could, the Night King would likely knock him out pretty quickly like he did when Bran was warging into the crows. I guess we’ll see very soon…

That look at Tyrion…

In Season 5, episode 3 (as Tyrion is en route to meeting Daenerys), that moment when the Red Priestess looks over at him always feels imbued with meaning…

Still in season 5, this time in episode 5, Melisandre has an interesting little monologue that she gives to Jon:

“There’s power in you. You resist it, and that’s your mistake. Embrace it. The Lord of Light made us male and female, two parts of a greater whole. In our joining there is power. Power to make life. Power to make light. Power to cast shadows.”

This feels huge, and like it covers everything from Jon’s origins to his destiny — the potential power, life, and light-bringing of Rhaegar and Lyanna, and of Jon and Dany (since her potential pregnancy was so heavily foreshadowed in season 7). It’s verbatim from the books, so is unlikely to be nothing.

I’ve seen some people suggesting that their union is what fulfils the Azor Ahai/Nissa Nissa, Prince that was Promised, and Lightbringer prophecies … one that even refers to Jon’s piggy wiggy as being his “flaming sword”. God knows. Some have even speculated Melisandre herself is Nissa Nissa, rather than Dany.

What’s interesting about this too is the “power to cast shadows”… In Quaithe’s prophecy re: Dany (though this is more in the books than the show), she says “to touch the light you must pass beneath the shadow”. What is the shadow here? We’ve seen Melissandre birth a shadow.

I’d love to know who spoke to Varys through the flames, and what they said. Kinvara knows. I wonder if we’ll see her again. And I wonder, should anyone betray Dany (which seems inevitably) whether followers of R’hollor really will come for them…